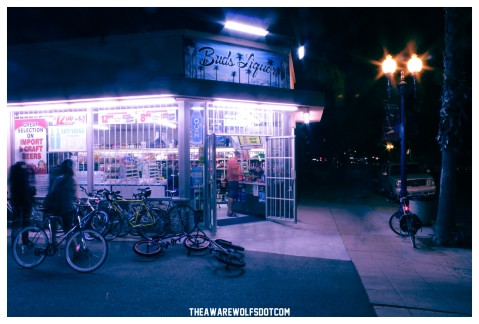 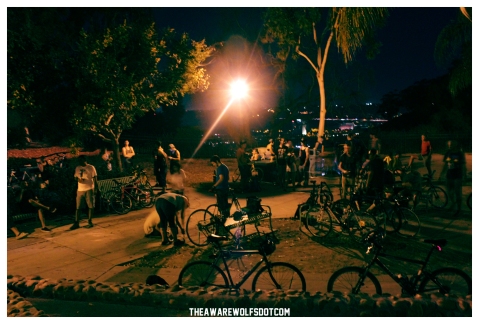 was a super mellowly awesome ride.

met up at the fountain in balboa park where critical mass was meeting up at the same time. we waited for all of them to leave then we did our critical pass while discussing the route over some beers.

the route was down park, up presidents way, over the bridge, up sixth, right on university, left on vermont to the foot bridge that goes over washington, a mandatory liquor store stop, to old trolley barn park where nathan and i tried to get a little bike limbo going on but it turned into a bunnyhop contest, then we cruised down to the flame where some of the homies were playing a free show. a good handful stayed at the show but another good fistful decided to keep it cruising. we then just rode over to both of the other foot bridges; the one on fourth and quince, and the one on first and something.

NO FLATS ON THE RIDE. there were slow leaks and flats BEFORE the ride but I dont think anyone actually GOT a flat- wait no nevermind. Garrett got a flat i remember. well, maybe someday we’ll do a ride with zero flats.

all in all, chill chill CHILL ride. about 47 people was the count i got which was super surprising. i want to post the story that i read to everyone just before we left the fountain about your life being full of positives and just wanted to say thanks to everyone who comes out on these stupid bike rides. they seriously are so fun for me to figure out and it honestly makes me so happy to see so much support from everyone on the daily with seeing people put the AWLF stickers up and what not. this is fun. lets keep it going.

“FILL YOUR LIFE WITH WHATS IMPORTANT”

A professor stood before his philosophy class and had some items in front of him. When the class began, he wordlessly picked up a very large and empty mayonnaise jar and proceeded to fill it with golf balls. He then asked the students if the jar was full. They agreed that it was.

The professor then picked up a box of pebbles and poured them into the jar. He shook the jar lightly. The pebbles rolled into the open areas between the golf balls. He then asked the students again if the jar was full.  They agreed it was.

The professor next picked up a box of sand and poured it into the jar. Of course, the sand filled up everything else. He asked once more if the jar was full. The students responded with an unanimous “yes.”

The professor then produced two beers from under the table and poured the entire contents into the jar effectively filling the empty space between the sand. The students laughed.

“Now,” said the professor as the laughter subsided, “I want you to recognize that this jar represents your life. The golf balls are the important things–your family, your children, your health, your friends and your favorite passions–and if everything else was lost and only they remained, your life would still be full.

The pebbles are the other things that matter like your job, your house and your car.

The sand is everything else–the small stuff. “If you put the sand into the jar first,” he continued, “there is no room for the pebbles or the golf balls. The same goes for life. If you spend all your time and energy on the small stuff you will never have room for the things that are important to you.

“Pay attention to the things that are critical to your happiness. Play with your children. Take time to get medical checkups. Take your  spouse out to dinner. Ride your bike. There will always be time to clean the house and fix the disposal. Take care of the golf balls first–the things that really matter. Set your priorities. The rest is just sand.”

One of the students raised her hand and inquired what the beer represented. The professor smiled. “I’m glad you asked.

It just goes to show you that no matter how full your life may seem, there’s always room for a couple of beers with friends.”